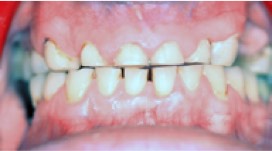 Mr J had problems with tooth decay and persistent grinding of his teeth. As a smoker, his condition was made worse due to minimal saliva secretion. Mr J was therefore more prone to tooth decay and erosion.

To restore his teeth back to full health, it was important to orally investigate further. Mr J was referred to the hygienist in order to improve his general oral hygiene.

A saliva test was later taken and indicated that his lack of mouth moisture was a severe problem. (A blood test at his GP also revealed Mr J had a liver problem.) He was instructed to cut down on his smoking and drinking and rinse his mouth twice day with a fluoride mouthwash. Over the course of a year, this would help him to strengthen his tooth enamel.

A personal treatment plan in consultation with Mr J was drawn up which would in due course boost his confidence and help to improve his social life. His decayed teeth were restored over several years, a course of action that required considerable co-operation from the patient. Mr J only wanted to restore the teeth in his upper jaw. The upper-left canine was kept and with orthodontist treatment the upper teeth were brought forward. Plans

A personal mouth guard was made to protect his teeth from grinding and allow the teeth to move forward in both his upper and lower jaw.

To accommodate the longer teeth, his gum needed to be reshaped as well. A set of temporary crowns were made. He wore these for several months in order to get accustomed to this new bite height.
During this stage, the temporary crowns could be altered and adjusted until Mr J was happy with his new teeth.

Mr J continued to have regular check-ups on his oral hygiene, and he was regularly monitored on how he was coping with his new teeth. After 9 months, a final impression was taken and new crowns from metal-fused porcelain were built. On the lower-right side of his jaw an implant was placed to provide him with a better chewing platform. 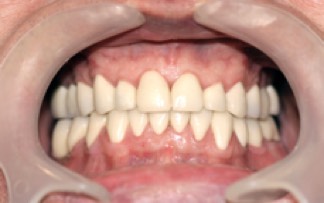 With this type of case, treatment continues with a good programme of daily dental hygiene. Now with a good diet, sufficient saliva flow and reducing the amount of fizzy acidic drinks, Mr J can expect to keep his new teeth for many years to come.

Please get in touch if you are concerned about any aspect of your dental health. We will treat you fairly and honestly - and we look forward to being able to help you.